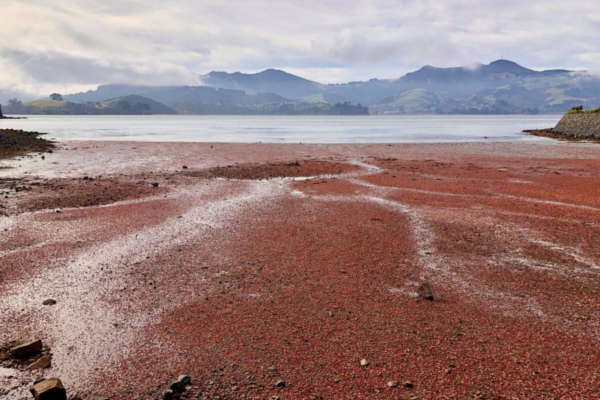 South Island beaches have been turned red due to the thousands of dead squat lobsters being washed to shore. The squat lobsters cling to the sand in high tide for breeding then because the adults refuse to give up their seafloor breeding grounds. Which then leaves the teenager lobsters known as krill with nowhere to breed. The strong instinct to settle and grip to surfaces leads to their death during low tide.

Some people are concerned about the many dead animals lying on the beach, but experts say that the dead lobsters are only a miniscule fraction of the overall population.

Over the past years patches of dead squat lobsters 20 to 30cm thick have landed on some of the southern beaches. These dead creatures have been seen most prolifically between Otago and Banks Peninsula, occasionally showing up in Tasman Bay and Cook Strait.

Squat lobsters play an important role in the food webs because they are a bottom feeder and predominantly scavengers. They have been found to be predated on, by a list of animals including fish species, squid, octopus, king crabs, birds and probably whales. In this they provide a key connection between the particulate organic matter on the seafloor and the top predators.

The reason I chose to do this for my current events is because it looked interesting and it is in New Zealand. I also picked this because I’ve never seen or heard anything like this happening so it’s different to most news items.

Do you think these dead squat lobsters on the beach have anything to do with climate change or is it just nature?

Do you think that it’s more likely that you would find dead squat lobsters on a beach in Dunedin or in Wellington?

« IT WAS A TOUGH RUN FOR SOPHIA.
GETTING HUNGRY AT THE RUGBY = LACHLAN »