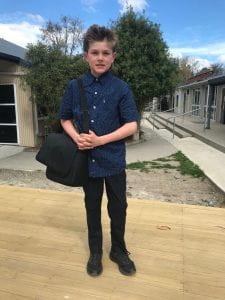 Lachlan in his news reporting costume = but he is the Man of Steel!

The story starts in the Man of Steel’s ‘Fortress of Solitude’ aka his bedroom. He’s been busy saving the world but hasn’t got any money. He goes to the Ashley Daily Trivia newspaper office where he meets some of the other main characters, Jerry Black, Bobby Benson and Linda Street. 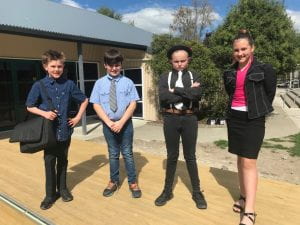 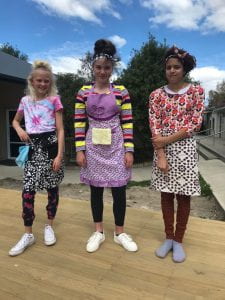 Landladies to the rescue! 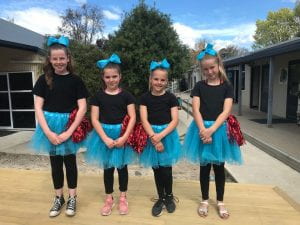 The gangsters meet with their leader Olga, and she tells them to get the Man of Steel as well, so they ring up the newspaper office to let the news media know that Linda had been kidnapped and a ransom had to be paid to get her back. The bad guys gave Jerry and Bobby at the Ashley Daily Trivia, a clue. It’s very simple – ‘don’t cover up this colourful brush with danger, where she is you’ll never find her’. As soon as the gangsters finished, the newspaper put it on their next edition, and the Man of Steel knew he had to go and find Linda . 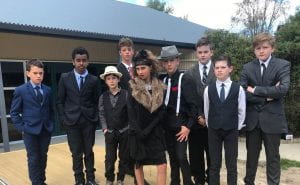 Olga and her gang of evil gangsters.

In the end the fan club, the police, landladies and newspaper staff, all end up going to the old paint factory to help defeat all the bad guys. The evil leader Olga was put in prison, while the Man of Steel moved on to save more people from danger across the world. 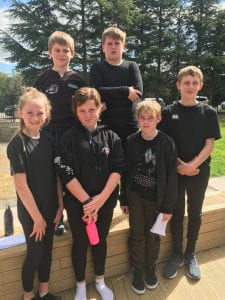 The backstage crew who worked so hard to make the show a great success.

I believe this production was one of the best that we could do. While it was sad that we couldn’t do it at the Rangiora Town Hall due to Covid-19, we improvised so it could be produced in our school hall and I think it went amazing.

« TERROR IN THE STORM FOR MAISY.
MAISY AND HER WHANAU WENT TO THE MARLBOROUGH SOUNDS. »