On Tuesday 4 August, Totara class had a visit from Martine, facilitator for Plastic Ocean Pollution Solutions, who helped to raise our awareness a little more about the problem of plastic in every ocean in the world. 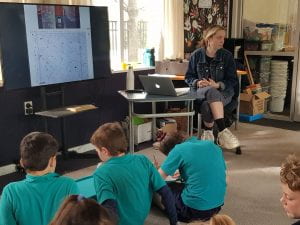 She showed us a very interesting video about this topic, and then we took time to think about and analyse a series of photographs which showed a range of plastic pollution in oceans and rivers throughout the world.

Martine belongs to an organisation called Algalita South Pacific, which wants us to be much more aware about the plastic pollution in the world’s oceans, and for us, in the Pacific Ocean, to act to prevent further pollution.

Here’s something which we can do to make a difference regarding plastics. An interesting part of this is the word REFUSE – in other words, you can say ‘NO’ to products or packaging which will lead to ocean pollution. In fact, we can say ‘NO’ to some items of clothing, much of which contains plastic fibres.

Here is an infographic which tells a little bit about the problems of plastic in the oceans of the world. What might you do in the near future to make a difference?

« SOPHIA IS BACK WITH A 100 WORD CHALLENGE
IZAAC HAS TO ESCAPE THE CARS! »